With results like this, no wonder so many girls and women avoid STEM options (Science, Technology, Engineering and Mathematics)! Results from over 20,000 people show stark gender differences in work-related interests and preferences.

The chart below shows Occupational Interests across all age levels, broken down by gender. Interestingly, virtually the same pattern is in evidence at all ages, with only minor variations. This includes students in school year nine. Perhaps this explains a lot about later career choices.

The data is drawn from user results in the Occupational Interest components of Career Voyage (https://www.jiig-cal.com.au/careervoyage) and Career Compass (https://www.jiig-cal.com.au/careercompass). These components are arguably the most thoroughly researched, robust and accurate interest guides, based on millions of dollars-worth of research and development. 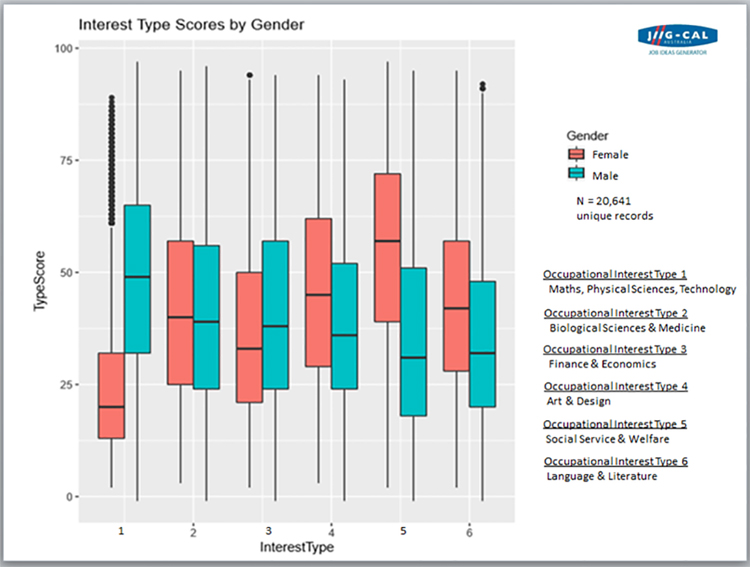 A break-down of the data by gender across different educational levels – from high school years 9 to 12, plus university, TAFE and beyond – is not included here as variations to the overall pattern are very small. Actually, very small indeed, which is surprising. While individual differences in interests vary as young people mature, these results show that overall patterns are stable and established before age fourteen.

The box chart or plot is a standard way of summarising large amounts of data. The bottom of the box is set at the 25th percentile, the top is 75th percentile. The whiskers (vertical lines) from the boxes indicate variability outside the upper and lower quartiles, and any points outside those lines or whiskers are considered outliers. (Each small dot represents a single individual outlier.) The median is indicated with a horizontal line inside the box.

Definitions of the Occupational Interest Types are shown in the table below.