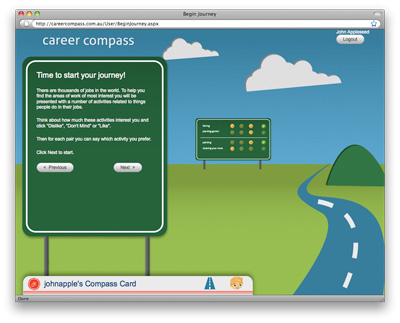 Why not include personality testing in career development resources as Career Voyage?

It’s a question we’re sometimes asked. The simple answer is that there isn’t much predictive validity in using personality factors with career decision making. That is, knowing a person’s personality attributes really isn’t particularly helpful for his/her career planning. Consider for example the best researched personality dimension of introversion – extraversion in relation to any occupation. Take teaching for instance. Can we say that somebody who is either introvert or extravert should, or should not enter this occupation?

In fact it could be argued that diversity of personalities gives an occupation a richness and depth not possible with homogenous groups.

There’s an additional issue of validity and reliability of personality test. Tech

nically the concept of validity means that a test is measuring what it purports to measure. A math test for example which uses lots of words may have low validity because it’s also measuring a person’s skill level with English language. Reliability on the other hand tells us if a test is giving us the same result each time, ie the margin of error in the test.

One of the criticisms of personality tests is that they have low reliability and low validity. This point is made starkly by Professor Robert Spillane (Macquarie School of Management) in the Winter 07 Edition of the AACC Australian Career Practitioner. Spillane is actually directing criticism at the use of personal testing in the management of workers. However many of his points are also relevant to career guidance.

“… personality tests are so crude that they should, at the best, be treated as research devices … (page 18). “After comparing three respected and widely used personality tests, two researchers found little evidence that even the best personality tests predict job performance … The technical deficiencies of such popular tests as Cattell’s 16 PF and the MBTI have been known for years. Most of the Alpha coefficients of internal reliability in the 16 PF fail to reach an acceptable level so testers cannot know what they are measuring. The limitations of the MBTI are well known: The original Jungian concepts are distorted, even contradicted, while studies using the MBTI have neither confirmed the theory nor the measure… That the designers and users of the MBTI claim the test can measure projections from an unconscious mind is simply embarrassing” (page 20). It is worth reading the rest of Professor Spillane’s article.

By contrast, the instruments in Career Voyage have gone through exhaustive testing. Indeed each item (or question) has been through a careful item analysis process to ensure high reliability and validity in relation to career decision making.